Dark times are approaching quickly for the world of Minion Masters. In our last expansion we had players explore the exotic Jadespark Jungle, hunting down a band of fanatical cultists known as the Burning Fist. Now, you need to rally your allies for the fierce battle that is to come as the powerful High Mage Leiliel in our latest adventure. With a new adventure chapter, awe inspiring new cards, and an improved method of getting your hands on new content, it’s a great time to join us in our Minion Masters journey.

The first set of cards we’re introducing in this expansion all revolve around the power of the Crystal Elves. Lord Fanriel the Stormcharger is a card we made to be an awe-inspiring leader of any push you make, mowing down hordes of smaller minions with ease while he charges. He’s quite durable as well, making him a great frontline option to defend your weaker, high damage backup.

But if you prefer a more spell-orientated defensive strategy, the Resonating Blast Crystal is perfect for you. The first time you cast it, it’s a simple damage spell, but when you cast it again you’ll cause an extra explosion where it was used the first time. It’s great for covering all enemy approaches in a match, or doubling them up to take down extra powerful minions. Its versatility makes it by far one of my favorite cards we’ve added to the game, letting you make quick decisions on the fly to give you the edge.

Our latest adventure features Leiliel delving into the raging battlefield of the Whispering Woods, where Crystal Elves war with the accursed Undead legions of Mordar the Mad. We wanted this adventure chapter to weave both elements of story and gameplay tighter than we’ve ever done before. In your trek, you’ll encounter not just the bony remains of the resurrected army, but the unsettled and maddened denizens of the forest who have lost the ability to tell friend and foe apart. It’s up to you to turn the tides of this battle and save those that remain, and rally an army capable of defeating the approaching doom to the west.

Over the last few expansions, one of our biggest concerns has been balancing the accessibility of new content with the premium rewards of our Battle Pass system. We made use of Season Tokens as an extra resource people could use to get brand new cards that were added to the game, but it always felt frustrating to go on a bad streak and end a season without the cards you wanted.

To solve this, we’ve decided to do away with any randomness in playing with our new releases in a set of huge changes we’re making to the Battle Pass. All new cards are guaranteed on the pass whether you paid or not, and we’re breaking up our content releases into a more digestible stream of regular updates. We also opted to make the earlier sections of our new Season Passes much easier for newer players to start with by lowering their XP requirements, and there’s a whole host of other changes coming to the Battle Pass system.

So don’t wait – Claim your free DLC for a limited time and start playing today! 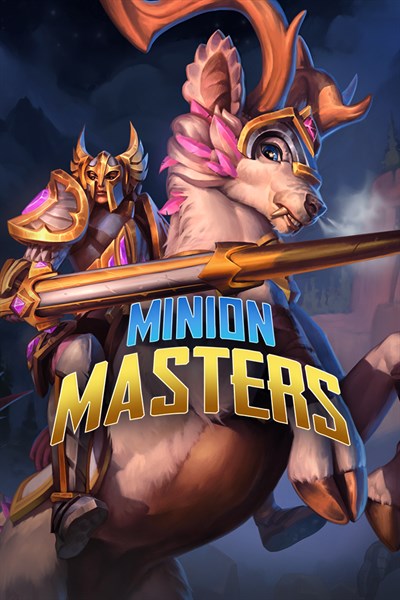 Engage in epic 1vs1 or 2vs2 battles, in this fast-paced strategic minion brawler that’s easy to pick-up but hard to master.
In Minion Masters there are many different Masters with unique hero abilities and you collect awesome minions ranging from: Fierce demons, cute creatures, devastating spells and much more. Utilize your minions to destroy the enemy Master! When a minion has been summoned they can no longer be controlled, so place them wisely to win!

1vs1 – Fight against other players and see how far your skills can take you. The rank of Grandmaster awaits if you can become one of the best!
2vs2 – Join with your friend or queue up with randoms to take down other teams in this super intense 2v2 action. Twice the minions, twice the action!
1vs1 Draft – Build your deck from a random selection of cards each run. You gain better rewards if you defeat more opponents, but be careful, 3 losses and you’re out!
Solo challenges – Complete solo challenges and hone your skills by practicing against Ai Masters!

Learning how to use your master’s abilities to their full potential and building your deck up around them is crucial for victory! Each Master has their own unique personality and play-style, which creates opportunities for all kinds of strategies! Only the most determined players can learn to utilize a Master to their full potential!

We have more than 100 unique cards (minions, spells, buildings) with more being added all the time!

New expeditions appear in the game all the time. Travel around the world of Minion Masters to explore new worlds, fight other players and defeat PvE challenges that lead to epic loot!

We believe in creating a forever fun and always engaging experience in Minion Masters, so we regularly spice things up with new events that last for a limited time. They range from challenges, friend events, tournaments, new game modes, bonus quests and many more.

Customize your character with epic skins!

You can even change your side of the playing area to a look that suits you, by swapping your arena with a new one. Want to fight on a lava world? Maybe in a sunken temple? Or a graveyard? There are many more options and the choice is yours.

Several community-driven tournaments have emerged around the game. Different tournaments happen every month, some for cash prizes, others for in-game currency or just bragging rights!
Are you the best? Prove it!

-Each player has a pool of mana and a deck of 10 cards (minions/spells/buildings).

-A card can costs between 0-10 mana and your mana regenerates over time during the match.

-There are 2 bridges in the middle that you need to capture and hold. They generate experience so your hero can level up his abilities before the enemy.

-You place minions on your side of the arena and the goal is to have them destroy the enemy’s tower.

-Minions have minds of their own and once you have summoned them, they can no longer be controlled, so place them wisely!

-Most minions have unique abilities. A few examples of this are: AOE damage, healing, teleporting, mana regen, flying and many more.

-Spells can be used to change the flow of the game in your favour. Spells such as healing, mind control or stuns can be devastating in the hands of a skilled player.

-Each hero has unique abilities that change the game drastically as they become active.

-Awareness, strategy and dedication is needed if you want to become great at the game.

Join in and have fun in our amazing world of Minion Masters!
– The Betadwarf team

Kitchen of the Week: A Create-Cook-Eat Space Built on a Tight Budget

A few years ago, British artist Peter Nencini led an illustration workshop in an exhibition space that thoroughly charmed him.

A Guide to Adding (or Expanding) a Canning Line