In this Nioh 2 Build Guide I’m going to show you how to play the Explosive Cannoneer Build using a Hand Cannon to clear entire Missions, including Bosses. I’ll be showing you where to place your Stats and Skill Points to get the maximum impact for this Build, as well what equipment to use, and which Guardian Spirit and Soul Cores to have. This is an End Game Build meant for players who are near the end of Nioh 2 or are in NG+, but it can be used by players much earlier in the game as well.

The Explosive Cannoneer Build is a ranged build that focuses on the use of Hand Cannons and Rifles to surgically destroy enemies from range through out entire Missions without running out of Ammo, and without having to fire a million times to kill something. One of the advantages of Hand Cannons is that they not only kill most enemies in a few shells, but they also stagger them, allowing you to get off successive shots more easily. Headshots can hit for about 20k damage with this Build, absolutely devastating human enemies, and shredding Yokai as well. 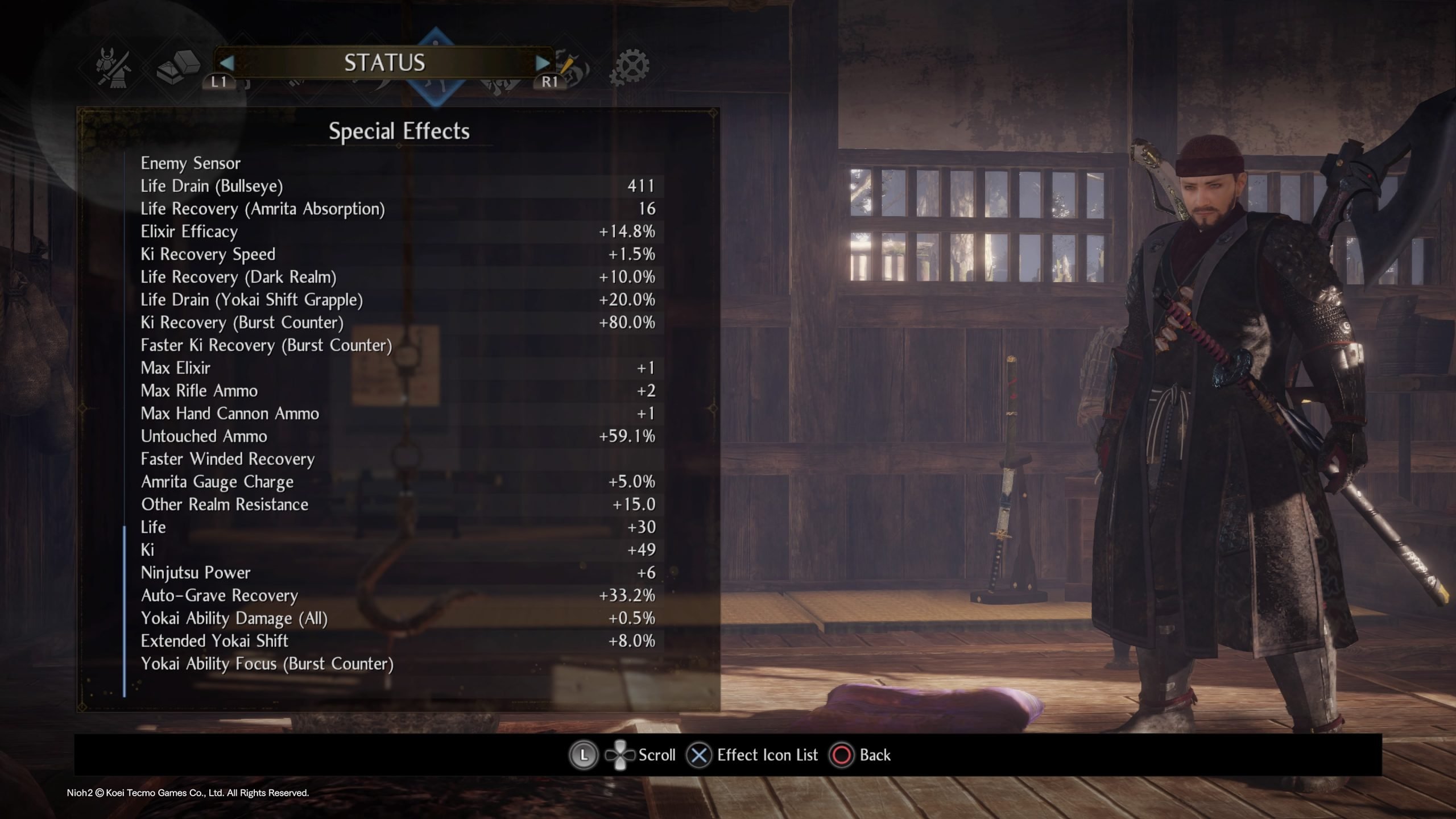 During Missions you can stock up at Shrines by exchanging Divine Rice at the Kodama Bazaar for Ammo, and you can purchase some from the Blacksmith between missions, which you should always do. Additionally, by taking the passive Round Carrier and the Clan Otomo you will be able to carry 2 extra shells of each type (regular and explosive), giving you at total of 14 on you at once. And, this whole setup is further enhanced by the Frugality passive which gives you some Ammo back when you killed enemies with a shot to their weakspot.

Probably one of the most remarkable things about this build is the speed at which you build Anima. You can nearly fill your entire Anima bar with one shot, and always with two, meaning you can’t spam your Yokai Abilities fast enough. This leads to a nasty rotation of firing a shell and then using a Yokai Ability and repeating over and over, which is devastating with the right Yokai Abilities. With this Build you’ll wish there were Yokai Abilities that cost more than 10 Anima! 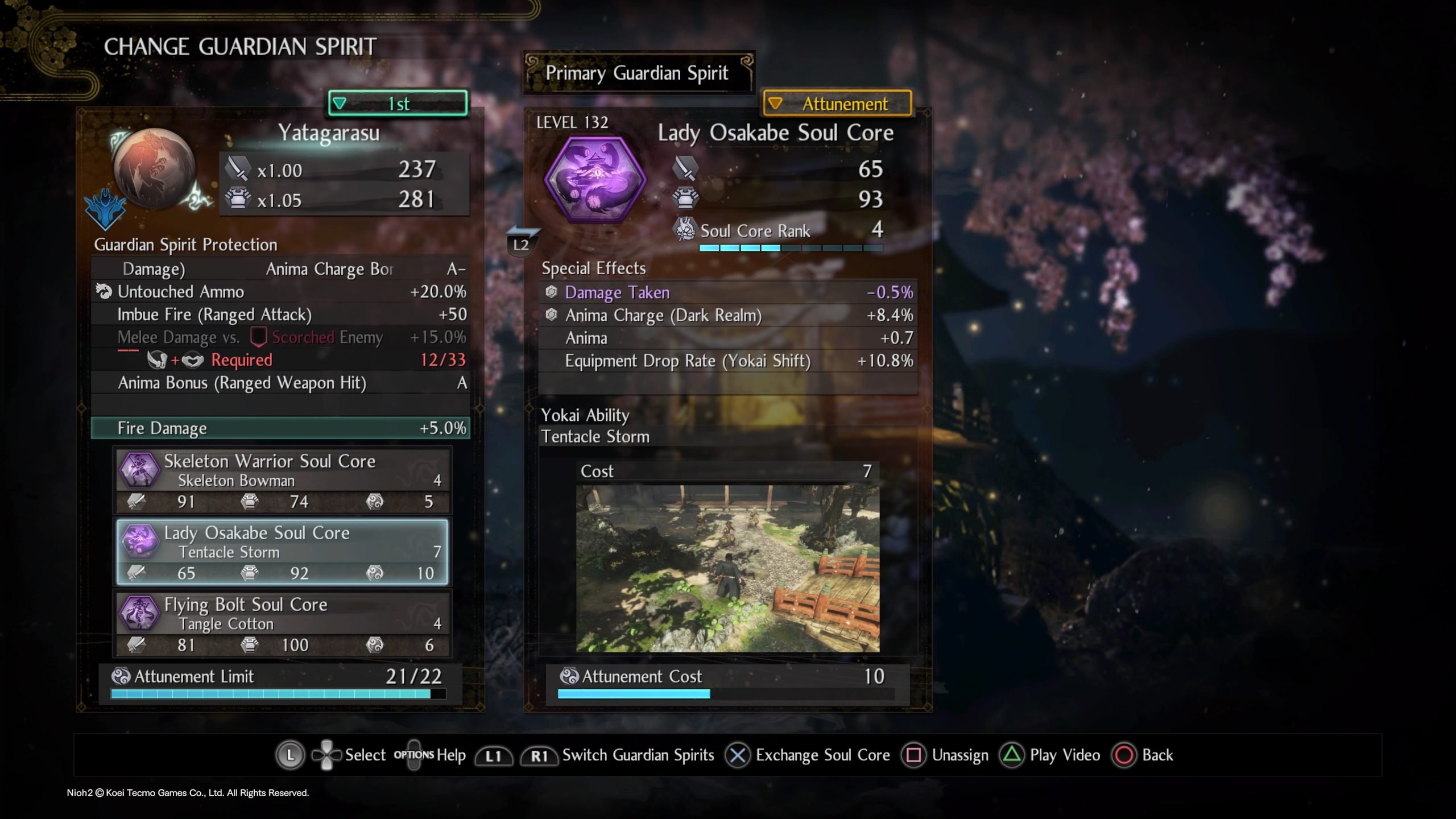 The Stats for this Build are very straightforward and you’ll want Stamina and Skill, with a bit of Constitution. Stamina is the primary Stat with which Cannons scale so you’ll max this out for best results. Skill is the second best stat for Cannons, and is also needed for the Armor set we are wearing, so you’ll want to prioritize this second. Constitution is only needed to meet the requirements of Saika’s Yatagarasu Set, so you’ll only need about 6 points or so here. You’ll want 99 Stamina, 99 Skill and whatever is left to go into Courage for further damage scaling, assuming you max out at level 300.

Since this is a Cannon Build that is the weapon you will obviously need, but otherwise what melee weapon you wish to use is up to you. One slot will be occupied by a Sword since it’s needed for the Set bonus, but you can use anything you want in the other slot. Axes scale really well with Stamina, so that’s not a bad choice.

The Hand Cannon you want for this Build is not part of a set and is called Tatsuke Cannon. The reason we use this Hand Cannon is that it comes with Hand Cannon Speed Up, allowing you to fire shots more rapidly, which is a must in fights with aggressive enemies. If you manage to find another Hand Cannon with this bonus, feel free to use that, but you can craft this one, and it will always have this bonus.

Bonuses you want to look for on Tatsuke Cannon are Untouched Ammo, Ranged Damage, and any other bonuses that boost Damage, such as Familiarity Bonus or Equipment Lightness Bonus. Untouched Ammo is needed to help preserve our Ammo count, and the others are self explanatory. You want to be able to kill things in one or two shots if possible, so the more damage the better. 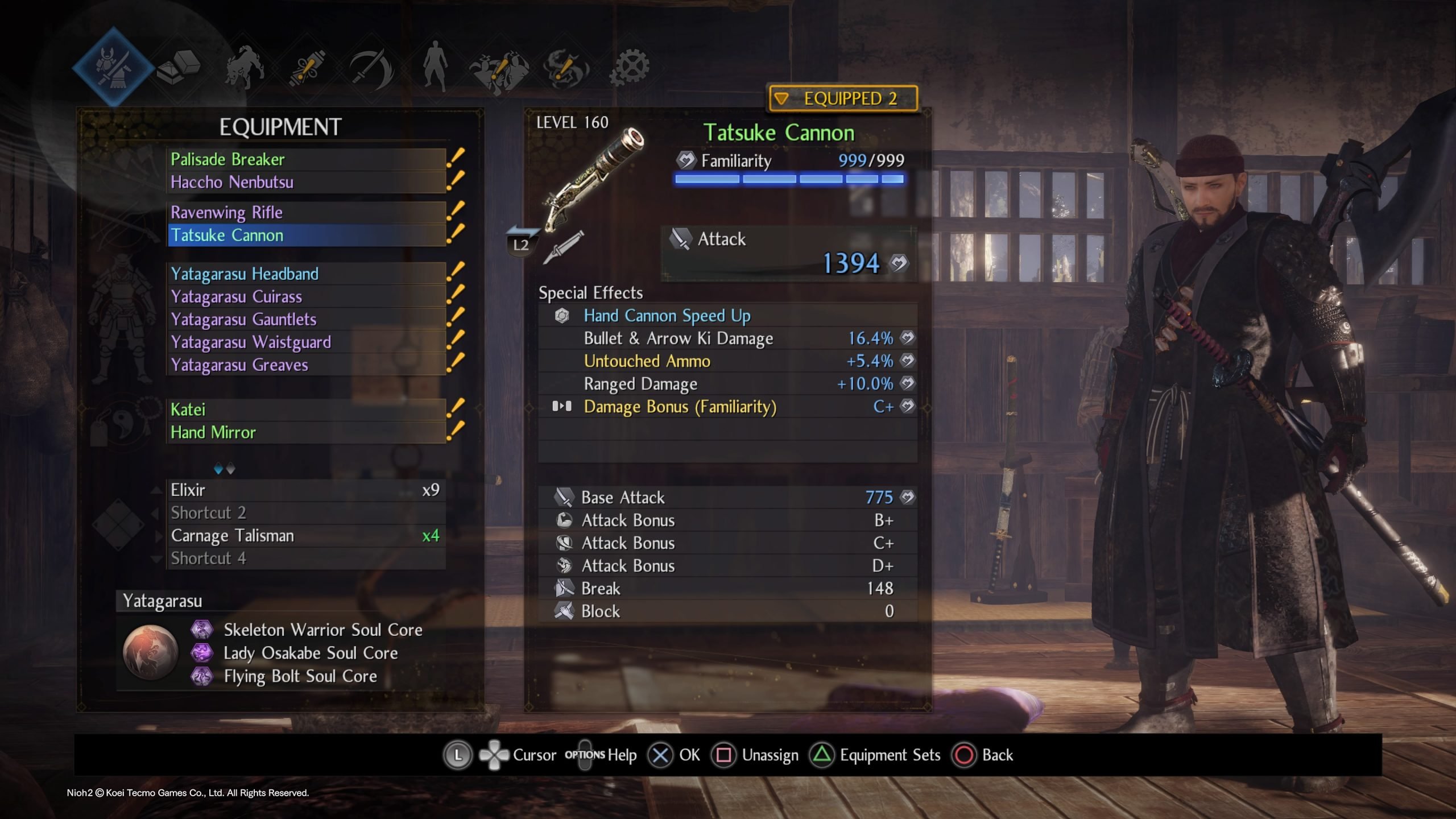 For other Weapons you can use whatever you want but you will need Ravenwing Rifle and Haccho Nebutsu to finish off the Set we are using so these will occupy one ranged and one melee slot.

For Armor you’re going to want Saika’s Yatagarasu Set in order to get the bonuses there. There really isn’t any other set that benefits Cannons so this is your best bet, and the +20% Untouched Ammo is vital to making this a Ranged Only Build. You’ll want to look for Untouched Ammo and anything that boosts Defense since you’ll be in Light Armor. 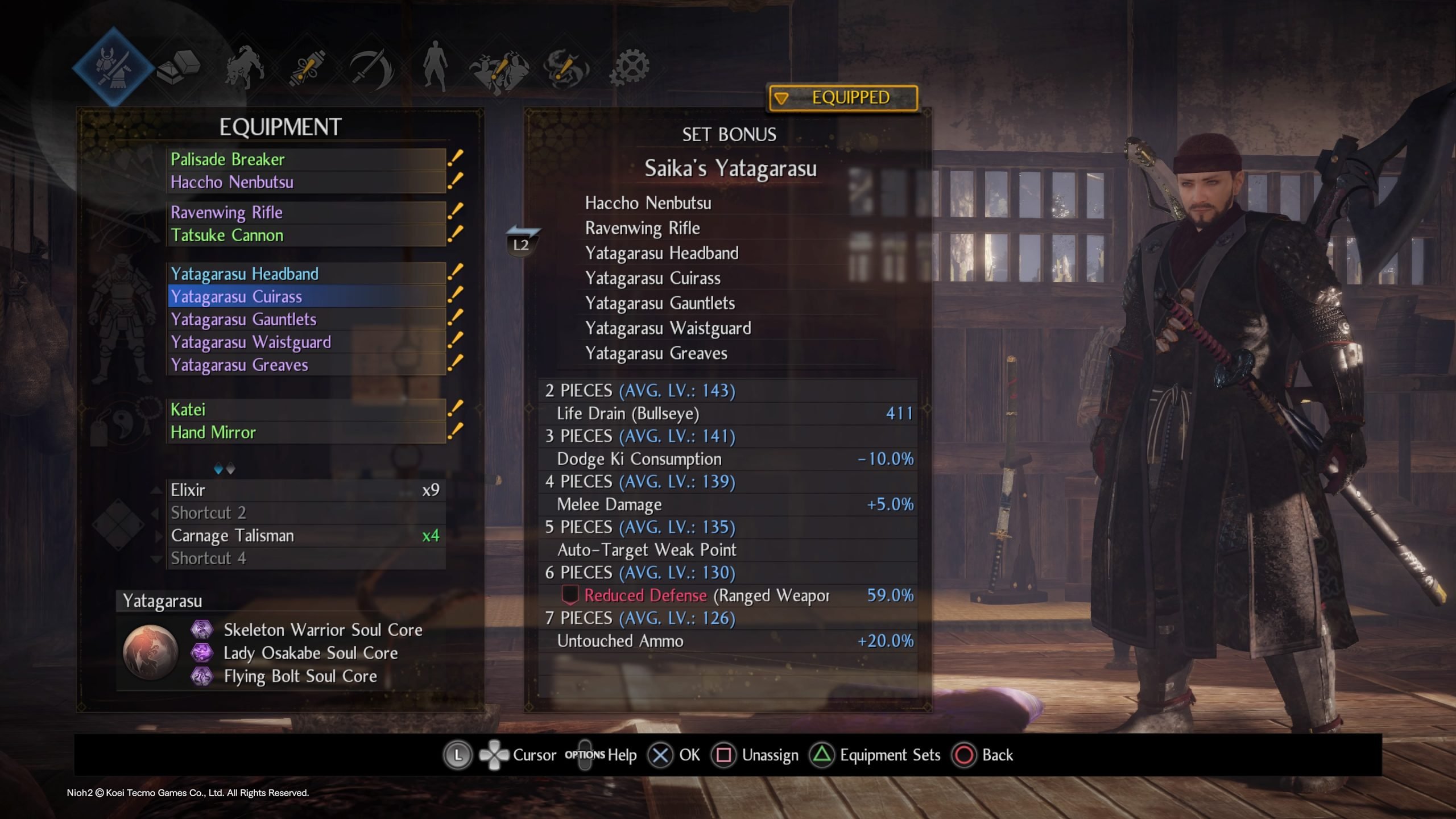 When it comes to Accessories the only bonus you need on both is Untouched Ammo, so you can really use anything you want otherwise. I like taking bonuses that just generally make my life easier, like Enemy Sensor and Auto-Grave Recovery, but other good bonuses are things that reduce the damage that you take or ones that help increase Anima gain.

Where to place your Skill Points is a vital part of making any Build in Nioh 2 work, and in this section we’ll take a look at the things you need to create the Explosive Cannoneer Build. Since all Nioh 2 players use Samuari Skills, let’s begin there before we take a look at, Shiftling and Ninja Skills.

Since you’ll be focusing 100% on Ranged Weapons for this Build you’ll want to make your way to the upper left part of this tree ASAP. You’ll want to max out Matchlock Master and Cannon Master and pick up Shot Pouch and Round Carrier. Then ALL other points will go into Deadly Eye to further boost Ranged Weapon Attack. I still haven’t been able to max this out yet, and I’m not sure you can. 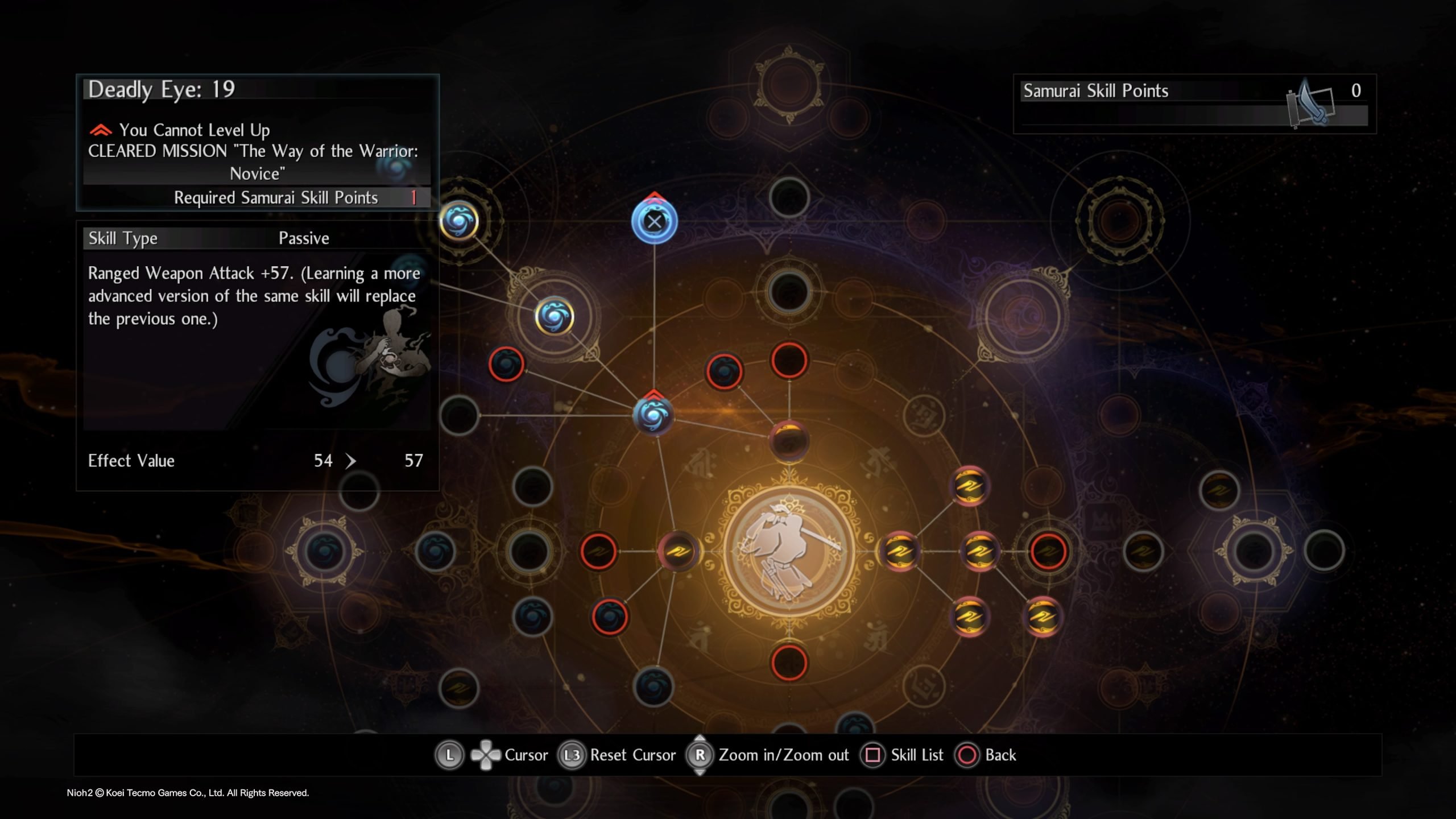 For this Build you want The Dragon’s Echo, and Dragon Vein which all allow you to build up more Anima, and this helps to spam more Yokai Abilities. Since you won’t be melee attacking whatsoever, if possible, nothing here is all that useful, though Soul Atrophy makes your Yokai Abilities even more effective, so take that as well. 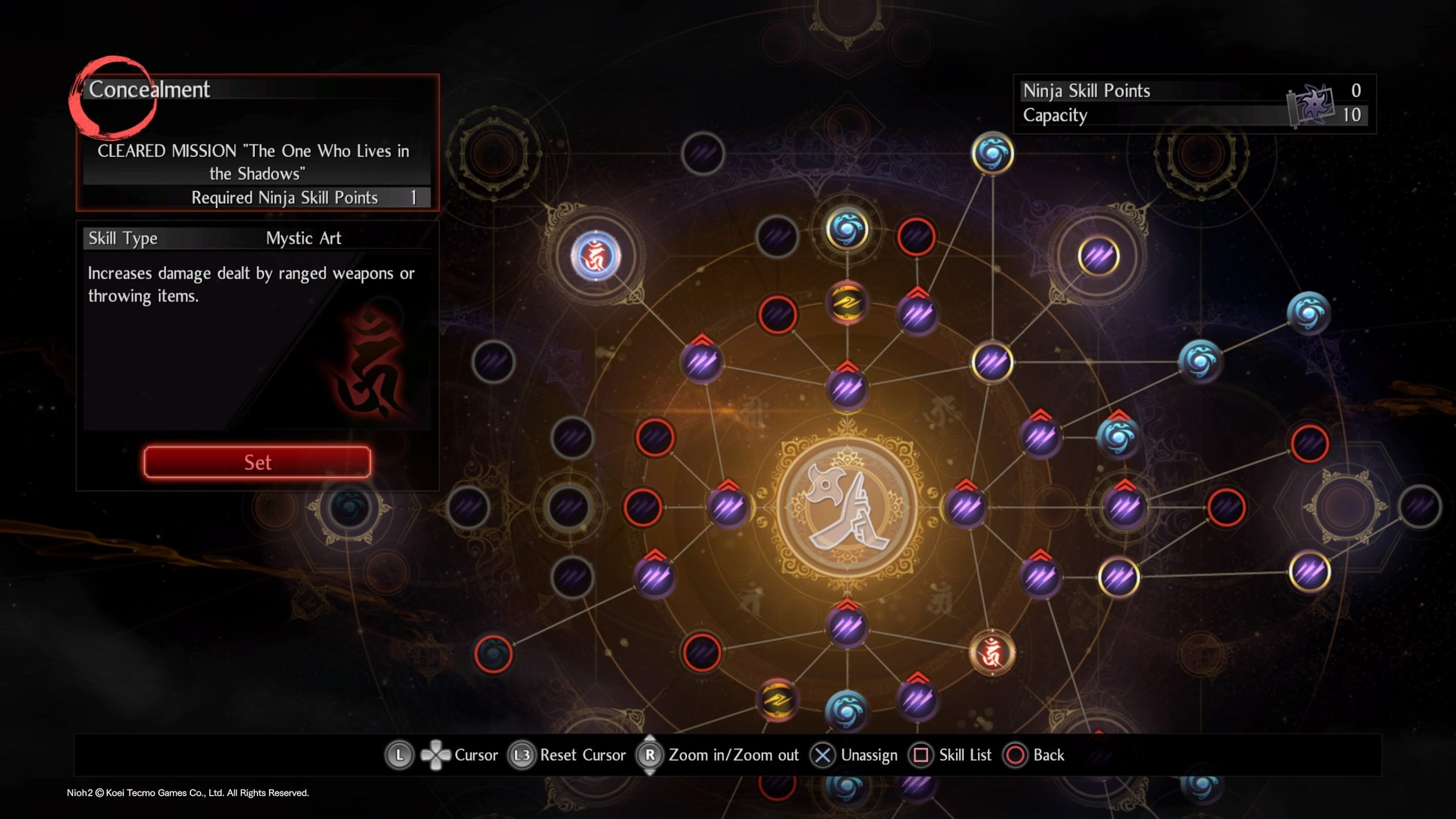 The Guardian Spirit you want for this Build should come as no surprise, and that’s Yatagarasu. This Guardian Spirit is going to give you Untouched Ammo +20%, Imbue Fire on your Ranged Attacks as well as Anima Bonus on Ranged Weapon Hit, which is partly how we get so much Anima. If you’re striving for a 100% Ranged Only build then there is no better Guardian Spirit to choose. 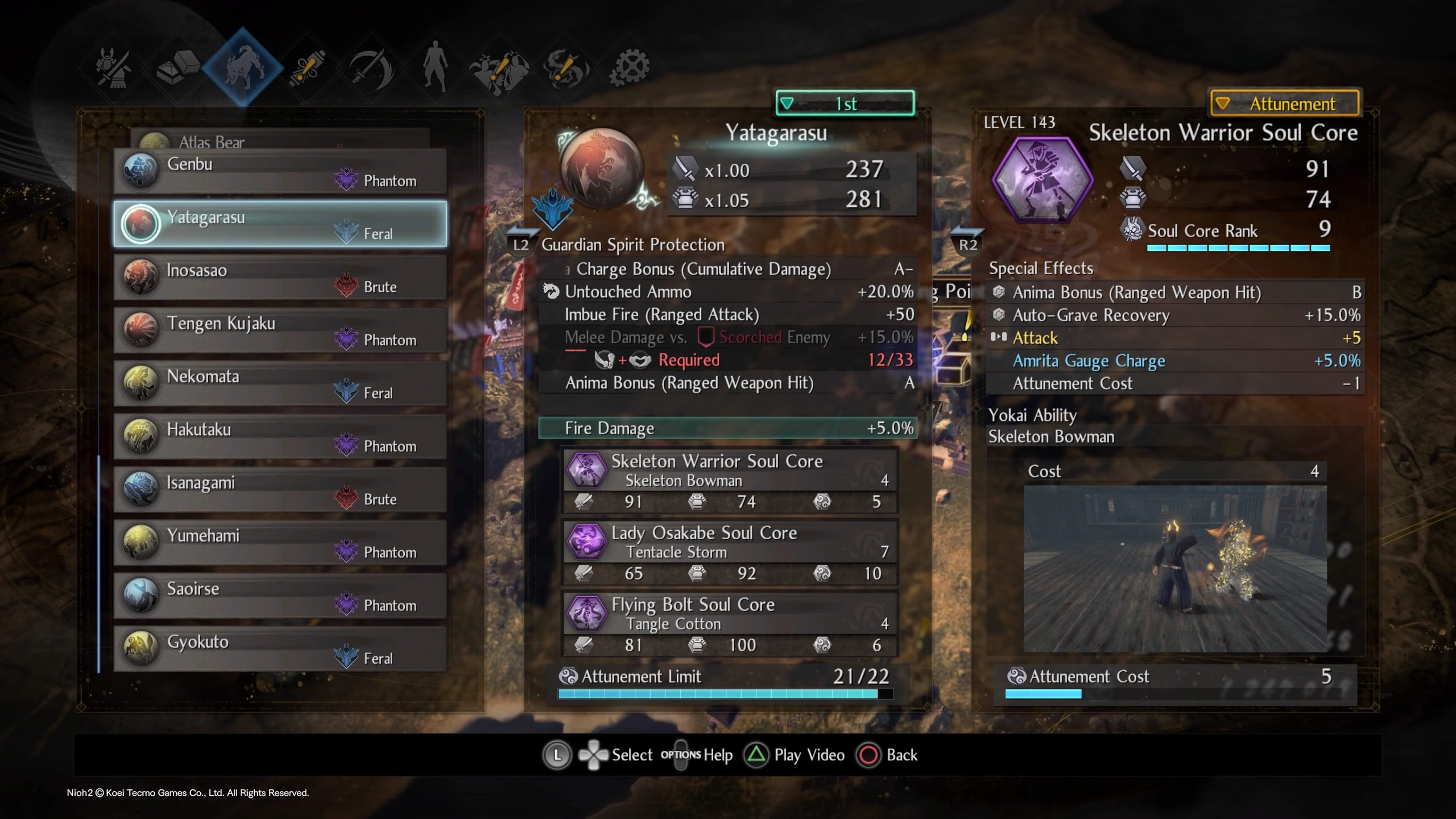 When it comes to Soul Cores for this Build there are two that I absolutely love and those are Flying Bolt and Skeleton Warrior. Both of these fully ranked up give you Anima Bonus on Ranged Weapon Hit B. And Flying Bolt helps to slow enemies when you hit them with Ranged Attacks as well. When combined with your Guardian’s Spirit’s Anima Bonus you get insane Anima Gain when you shoot things with your Cannon.

You’ll also want a hard hitting 3rd Soul Core to spend that Anima on, so get one that costs a lot since you’ll build it back up quickly. Some you can choose are Lady Osakabe, Yatsu-no-Kami, Gyuki, Kasha, Ryomen Sukuna, or Otakemaru. 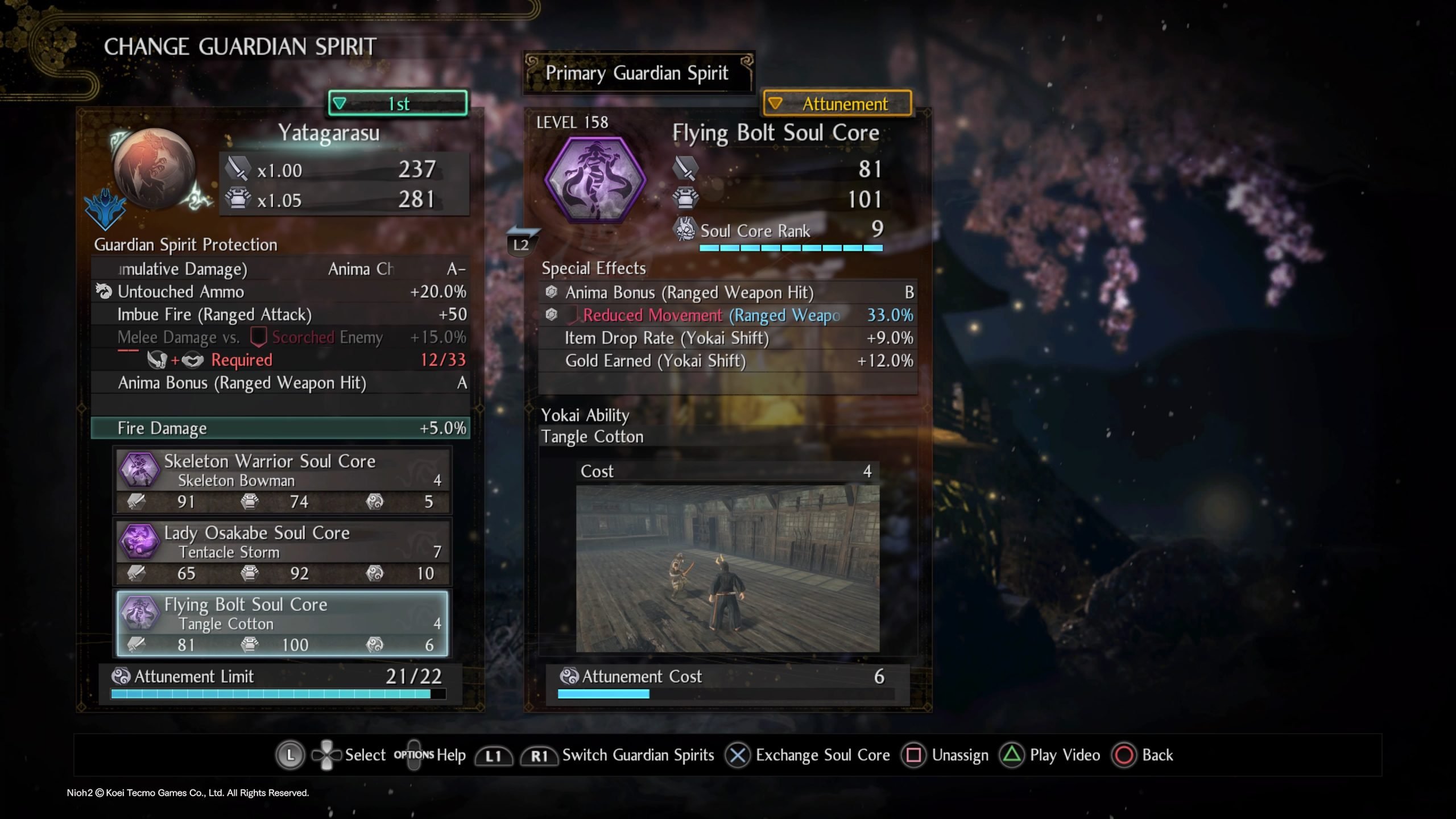 There are really only 2 Clans that benefit this Build and those are Kuroda and Otomo. Kuroda increases your Hand Cannon Damage by 9% and Otomo increases your carrying capacity by +1, which will allow you to carry 1 extra regular shell, and 1 extra explosive shell. Of these two I highly recommend Kuroda as this will help make your rounds last longer, which is by far the hardest thing to manage with this Build. 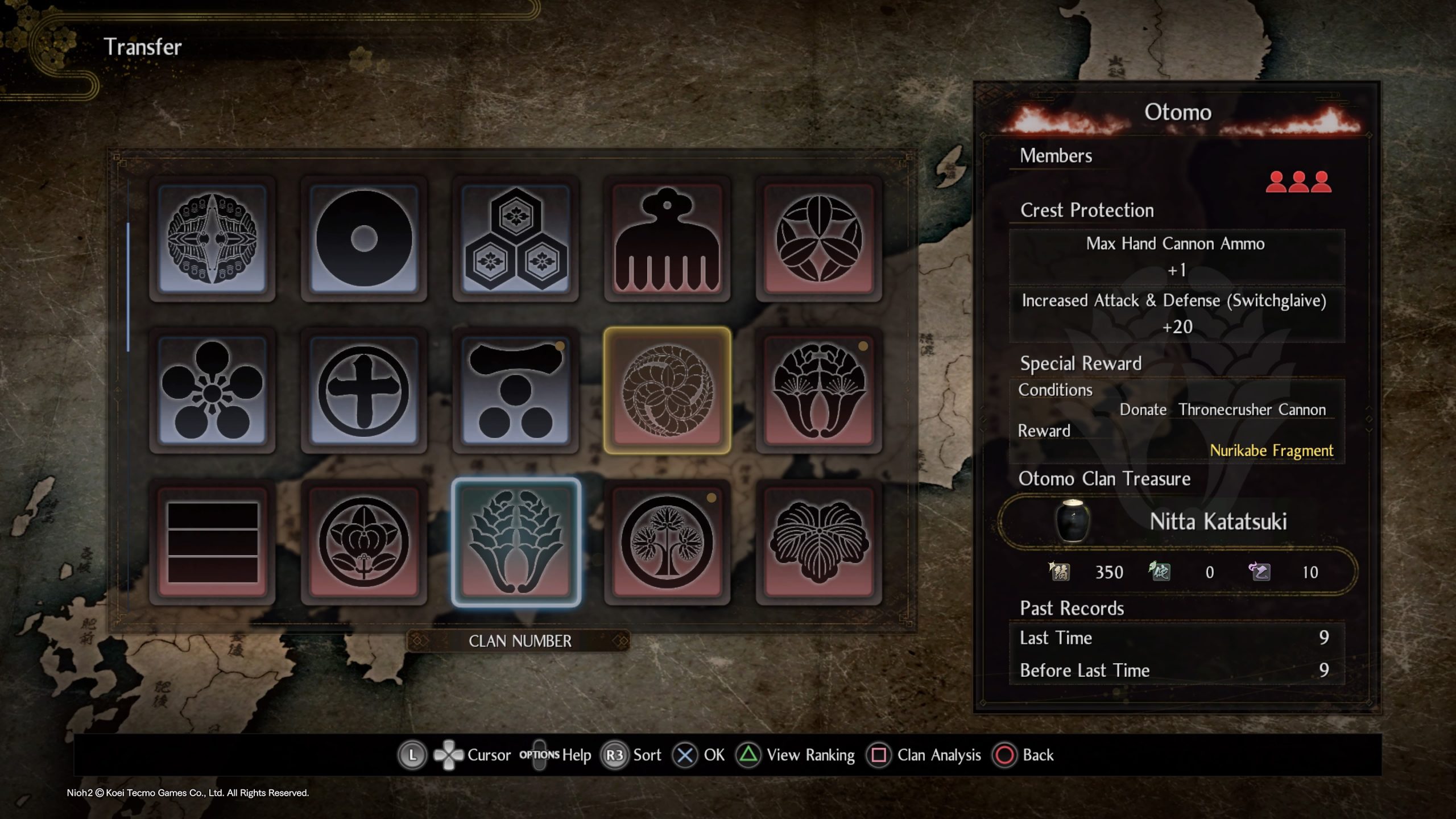 Be sure to pick off weaker enemies with your Rifle and save your Hand Cannon for tough to kill humans, Yokai and Bosses. You Rifle will still hit like a truck with this setup, and should one shot most any enemy that isn’t an elite. This helps to make sure you have max firepower for tougher enemies.

You don’t need to focus on Fire Damage for this Build because even with the Yatagarasu Guardian Spirit bonus of Imbue Fire, you won’t do much Fire Damage. You will set enemies on fire from time to time, but it should be something that you’re aiming to do, and isn’t particularly important since you generally kill things before Fire can do much damage anyhow. Long story short, don’t worry about Fire Damage.

Aggressive enemies are the hardest to fight when using this Build and you will have to Dodge and re-position from time to time, expect that. However, one way you can make things easier is if you take the Caltrops Ninjutsu and lay them down before you start firing so that you can slow down enemy movement. This will give you more time to fire since enemies take longer to get to you. And remember, Hand Cannon rounds usually stagger enemies for a second, which usually lets you get off repeated shots if you can get the first one off.

Lastly, things like Carnage Talisman and other buffs that buff Attack don’t seem to affect Ranged Weapons so I wouldn’t worry too much about using them. Just find your mark and begin opening fire as quickly as possible, aiming for the weakspot if you can. Even Yokai generally take more damage when you shoot their face, so it’s not a bad place to aim.

Stay tuned for more Nioh 2 Guides, including Builds and Weapon Guides, and be sure to check out our Review for our thoughts on the game. If you need further help, head over to the Nioh 2 Wiki, and don’t be afraid to add information that might help others out!

We got unlucky on COVID-19. The wrong man is in charge during a once-in-a-lifetime crisis : politics

Valorant is set for inevitable success, but there’s still room to improve • Eurogamer.net

Expect it to be huge. Valorant, Riot Games’ tactical, abilities- and weapons-based shooter, is finally out in the wild, and

Painting for Toddlers; Minimize the Mess, Maximize the Fun!

Two Roads Adding Everything But The Kitchen Sink – mybeerbuzz.com